Ok, so I’ve decided that I really want a knitting machine. I’ve had people say they’re too noisy or not relaxing, but I have to say that the small amount of time I’ve spent with one I love them. I know you could simply just knit something, but why not do both? I’d love to have that option!

For anyone who has never seen one here’s a brief video of a woman using one that I found on YouTube. Sorry I totally forgot to take a picture of the one I was using, I was too excited!

Most recently I made a scarf that I planned on felting. I used the exact model of machine used in the video but with a thin wool. I measured a regular scarf and added about 30% to its width and length to find out how big my piece was going to need to be (you lose about 30% when felting wool). I also set the machine up to create ladders and basically I got this.  (This particular photo is of a sample I made on a different machine.) 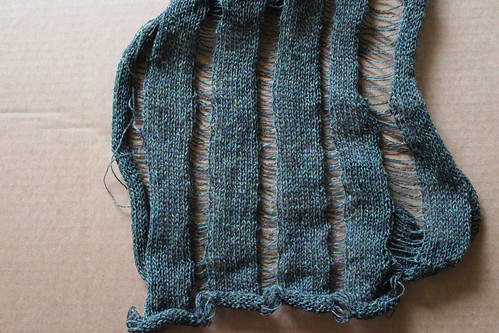 And it was pretty long! And wide! I had a heck of a lot of wool to bring home with me!

After washing it at on a regular setting at 40 degrees, bingo bango I had a scarf! 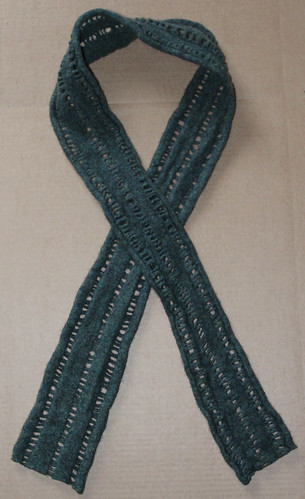 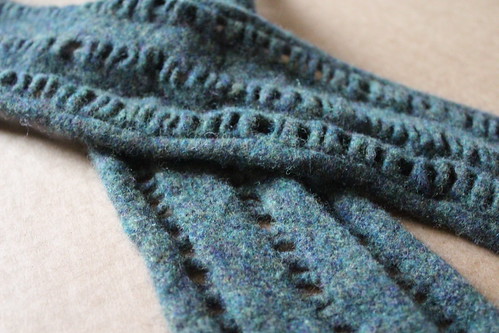 Considering it was my first attempt at this I thought it turned out well. I’d happily do it again (I’m sure you would have guessed that 🙂 ) Hopefully I’ll be able to get my hands on a 2nd hand one. A woman I know found one at a charity shop the other day for £10. Nice.

If anyone is wondering why I took my photos on a flat cardboard box, well it’s because we’re in the process of moving and it seemed like the easiest thing to do 🙂

2 thoughts on “Continued adventures with a knitting machine”